Surfline Man Goes Shopping for Yoga Pants and Finds Enlightenment: “The pursuit of happiness is the source of unhappiness!” – BeachGrit 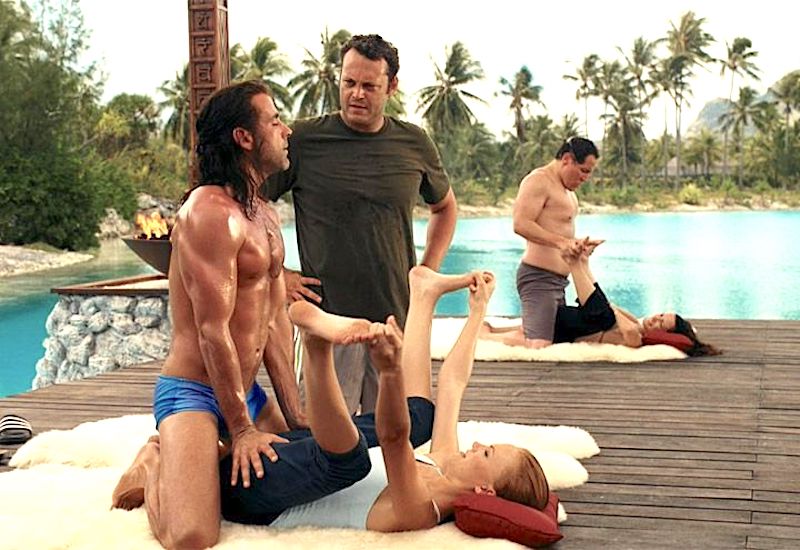 Sounds pretty zen, but Surfline Man wonders what that even means.

When we last saw him, Surfline Man was sauntering out of the Seaside Market, whistling a happy tune, carrying a fresh bar of surf wax.

For luck, you know!

While inside the iconic grocery outlet, Surfline Man had at last met the girl of his dreams, Casey — you know, the girl with the cute Ryan Lovelace midlength in the Swamis parking lot. After weeks of searching, he found her, right there at the deli case, buying her kale salad.

The path of true love had never looked so smooth.

All Surfline Man needed to do was go to yoga.

How hard could that be?

It’s just some sweaty, stretching in a small room with a bunch of other people, hopefully including the cute girl from the Swamis parking lot, Casey.

Before undertaking a new activity, it’s very important to get the right equipment. This is something that Surfline Man knows deep in his bones or wherever it is that super vital knowledge is stored.

He knew he needed a yoga mat, ideally made from recycled plastic water bottles or something. I’m really into sustainability now, brah.

Next stop, the lululemon store. He knows there’s one nearby, he’s driven by it on the way to REI, which is totally one of his favorite stores. He likes to keep some freeze-dried mac and cheese in the Sprinter, just in case. He got a pretty sweet solar-powered flashlight there, too.

Anyway, Surfline Man knows if he’s going to impress the girl, he needs to buy some sweet threads. Maybe that’ll make up for the part where he really has no idea how to actually do yoga. Clothes make the man! He’s pretty sure he heard that somewhere.

Surfline Man has never been inside a lululemon store before now.

And he has to confess, it’s all a bit overwhelming. Like, he didn’t really know that sports bras came in some many colors and shapes. And well, sizes. There are a lot of sizes. This is all very embarrassing and he’s beginning to think this whole yoga thing was a bad idea.

But soon a friendly dude with a ponytail directs him toward the men’s clothing. It’s all mellow, neutral colors. Surfline Man suddenly feels much better about the whole thing.

I can wear this, he thinks, looking at a charcoal-gray shirt made from some sort of technical material that promises to wick away his sweat. Surfline Man would prefer that the cute girl from the Swamis parking lot did not see him sweat.

Feeling more confident, Surfline Man adds a marine blue hoody to his new outfit. Marine blue sounds oceany, a reminder of his favorite place! He isn’t sure the fabric will do anything special for his sweating, but it’s soft and he likes it. Some things are simple.

He is starting to sweat, jammed in the tiny fitting room, surrounded by mirrors, trying to find pants that don’t like, show everything. He remembers that his ex-girlfriend used to say that black is slimming, but he’s not sure whether that’s good or bad in this situation.

Maybe gray. Gray seems like a safe choice. Surely he can’t go wrong with gray pants. Maybe this pair isn’t like, too tight and stuff. I think my ass looks good in these, Surfline Man says, craning his neck to look in the mirror.

A girl in bright pink yoga pants takes his selections to the register. She seems nice, if a little hungry. He wants to buy her a sandwich, but he figures that she probably only eats kale or something. And that high-pH water. Which, that whole thing seems pointless.

Surfline Man plunks down his credit card, and tries not to think about all the cool stuff he could buy at REI instead. Sometimes, a man has to make sacrifices in the pursuit of love.

Back at home, he sits down at his computer to look up the yoga studio schedule. No excuses left. He has his sustainable, recycled yoga mat. And he has his new wicking clothes, all safe and sound in their bag with the inspirational sayings on it, though really he’s not sure what any of that crap means.

Is that like what you do before you get held under by a five-wave set at San-O? Surfline Man isn’t sure how that leads to enlightenment. He clearly has a lot to learn about this whole yoga thing.

The pursuit of happiness is the source of unhappiness.

Sounds pretty zen, but Surfline Man wonders what that even means. He likes his advice more straightforward. Like, don’t burn the locals. That kind of straightforward. Maybe chasing the cute girl from Swamis will end in unhappiness, but he’s not about to give in to depressing thoughts like that.

Put away your phone, your real life is not on hold.

How the fuck is he going to check the tide, if he puts away his phone?

Really, this whole yoga thing is getting kind of annoying. Like, he paid way too much money for some clothes that maybe make his ass look fat, and now he has to put away his phone? I mean, fuck, a man does have limits, you know.

Now totally stressed out, Surfline Man needed his happy place, and he needed it right now.

With a desperation he wasn’t willing to question, Surfline Man craved the true relaxation that only tide charts and wave heights could offer. All those colors. All those cute as fuck animations promising waves, waves, and more waves.

He even keeps the browser tab open at all times — just in case. Surfline. It’s the best kind of enlightenment, no deep breathing needed.

And look! Right there on the models, Surfline Man sees hope for the future. The best kind of hope. Surf is coming!

The first winter swell of the season! This gets Surfline Man so excited he forgets all about the deep breathing and the pursuit of unhappiness and all that shit.

The models never lie. He feels very certain about this, if nothing else in his life.

Where is he going to go?

What board is going to ride?

So many super significant decisions to make. Surfline Man has so much to do right now. So much important stuff!